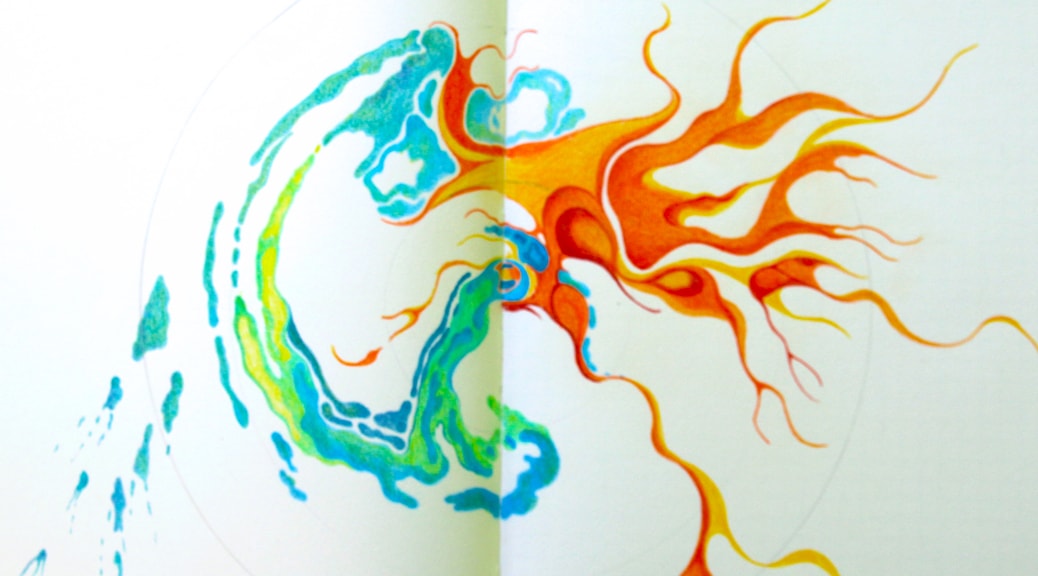 Often, we mentally place two qualities, choices, or even people, in opposition. Then, we conclude that more of one (or for one) must necessarily come at the expense of the other, without even thinking to ask if the two people/ideas/paths are really opposed. How might your thinking change if you considered whether these two things could be like the warp and weft of a piece of fabric, both valuable and necessary, both contributing to its strength and beauty?

Several years ago, four of my students and I attended a workshop taught by renowned watercolorist Cheng-Khee Chee. One of my students asked Chee, “Do you plan your paintings out ahead of time or do you work spontaneously and intuitively?” Chee explained that he did both, and went on to say “Reason and emotion are the warp and weft of a painting.”

The warp and weft. Woven together, and both essential to the integrity of the fabric.

What a different metaphor than we usually use for the relationship between reason and emotion!

I don’t know if it’s a quirk of our language, a reflection of our cultural fascination with “winning” and/or being “right” or a reflection of our natural tendency to categorize, but we do seem to have a tendency to think in terms of opposites. And often, when we mentally place two ideas—or people—in opposition, we then conclude that more of one (or for one) must come at the expense of the other.

After hearing Chee’s remark, I began to see that my paintings—and my life!—were richer and stronger when they had both a good measure of reason (planning, analysis, critical evaluation, deliberation) and emotion (intuition, spontaneity, playfulness, passion). Furthermore, with a bit of practice I discovered that there really was no conflict. I could think rationally and respond emotionally at the same time. There was no need to squelch one in order to access the other.

All that was required was that I learn to stop thinking of them as mutually exclusive. The metaphor of a strong and beautiful fabric made of two interwoven yarns—both necessary, both playing a role in the character of the fabric—has been a fruitful one for me.

How often do you find yourself thinking in terms of conflict, of either/or, win/lose without even thinking to ask if the two people/ideas/paths are really opposed?

What would happen if you considered the metaphor of warp and weft? What if the two seemingly-opposed things could both be present, both be valued and celebrated, both employed or pursued at the same time?

The yin-yang concept and symbol carries a somewhat similar idea: that balance is dynamic and fluid and requires an interplay of yin and yang, and that even when it seems one is ascendant, it still contains within it the essence of the other (the little black and white dots in center of the big black and white “tadpoles”).

1.  Choose two qualities, ideas, choices or people who you generally think of as being “opposites”.

For the first few times working with this exercise, you may be more successful if you choose something rather abstract and neutral, rather than something that causes you a lot of angst. It could be as simple as complementary colors, summer and winter, or as I’ve chosen for this week’s example, fire and water.

The goal is to reconsider your usual assumptions about the relationship between these two things.

If you start with something you’ve already been wrestling with and ruminating on at length, you may find it more difficult to wholeheartedly shift your thinking. Consider choosing something a bit less charged for your first experience with this exercise. Tackle more charged issues after you’ve had a chance to experience and understand how the exercise works.

2. Spend a few moments brainstorming or mind-mapping each quality/idea/concept/person.

What are some words and phrases that come to mind in connection with each? I like to mind-map these and allow myself to go off on tangents a bit before returning to the central concept. Here are my mind-maps for fire and water, as an example.

Mind-mapping my initial impressions of fire and water. Working fast and without reflection.

3. Choose some visual qualities to suggest each quality/idea/concept/person.

4. Set up either a “yin-yang” format or a “woven” format (or both) and create a mandala, doodle or “weaving” of the two visual elements.

In my example, I chose to work in a “yin-yang” format with colored pencils. I find colored pencil shading soothing and meditative. It helps me let my mind wander out of my usual modes of thinking. Perhaps interwoven doodles would appeal to you, or perhaps you’d like to work in watercolor and allow the water to mingle colors and forms as you create your yin-yang or weaving. If you like, you could even work on two different pieces of paper, cut them up and actually weave them together.

Fire and water union-of-opposites mandala. This is by no means “finished”. I like to return to this sort of page and develop it slowly over time, meditating further on the union of these two “opposites”.

5. Focus on creating the image, but notice any thoughts or insights that emerge.

As you worked to represent the interweaving of the two qualities/ideas/concepts/people, did you realize anything new about them that allowed you to see them as not necessarily opposed or in conflict?

As I worked on my fire-and-water mandala, I was struck by the similarity of many of the shapes I associate with fire and water. I considered how they are both characterized by movement and fluidity. I realized that there are, of course, times when flames are blue, and times when water appears red.

I thought of how mesmerizing they both can be. We love to watch the flicker of a campfire or ripples in a stream.

I thought of how fire and water combine to make the steam that carries the soothing qualities of both in a sauna. I thought of the beauty of mist floating above a lake or rain clouds building as the sun warms the wet earth. I realized we use a combination of fire and water to cook foods that would be hard to digest otherwise. I thought of the flame of my gas water heater warming water for a hot shower or bath. The more I thought about it, the more it seemed that fire and water play at least as large a role in our lives in combined form as they do separately.

Not a momentous example, and yet, each time I do this exercise, it shifts my thinking just a little. I’ve become more and more aware of how I make arbitrary mental oppositions, or at least separations, between things which are not opposed at all.

I’m more likely now to take a few minutes to ask if there really is a conflict, or if I’m just mindlessly setting up an opposition between two things that often work in concert. Is it really either-or? Or is it warp and weft?

One more way to step outside my usual worldview and encourage the open, flexible frame of mind in which creativity flourishes. 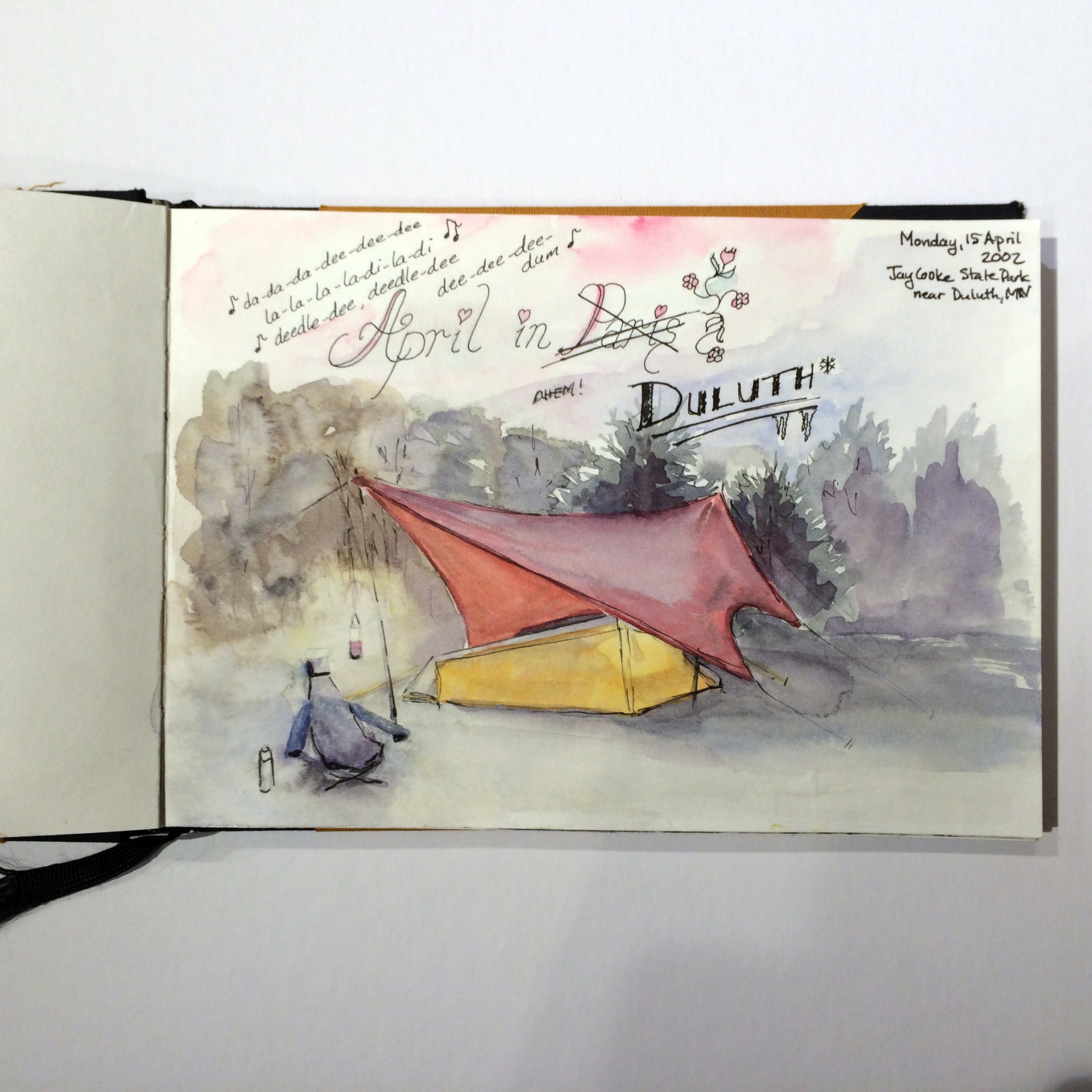 Line and Wash – Watercolor Painting Anyone Can Do

Line and wash is a combination of line drawing with watercolor washes to suggest a scene. It’s a great way to get started with watercolor, or with travel sketching, even if you “can’t draw” and have never tried watercolor before!

END_OF_DOCUMENT_TOKEN_TO_BE_REPLACED 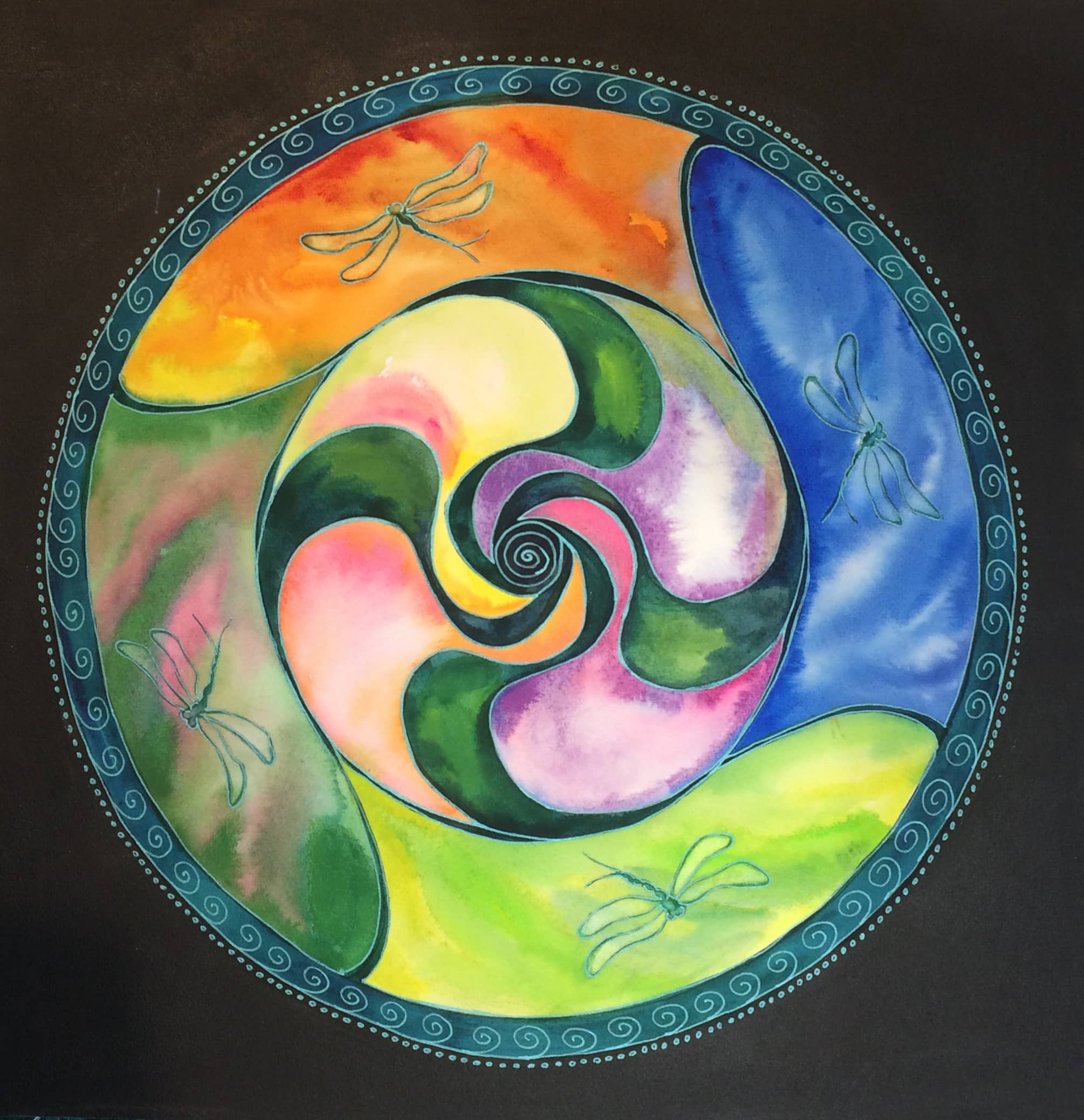 I know some of you enjoy using the templates I create for my Watercolor Prayer/Meditation Mandala Mini-Retreats. I created a new one that was very popular at the last mini-retreat, so I decided to share it with you here. This one has some larger open areas for you to...

END_OF_DOCUMENT_TOKEN_TO_BE_REPLACED 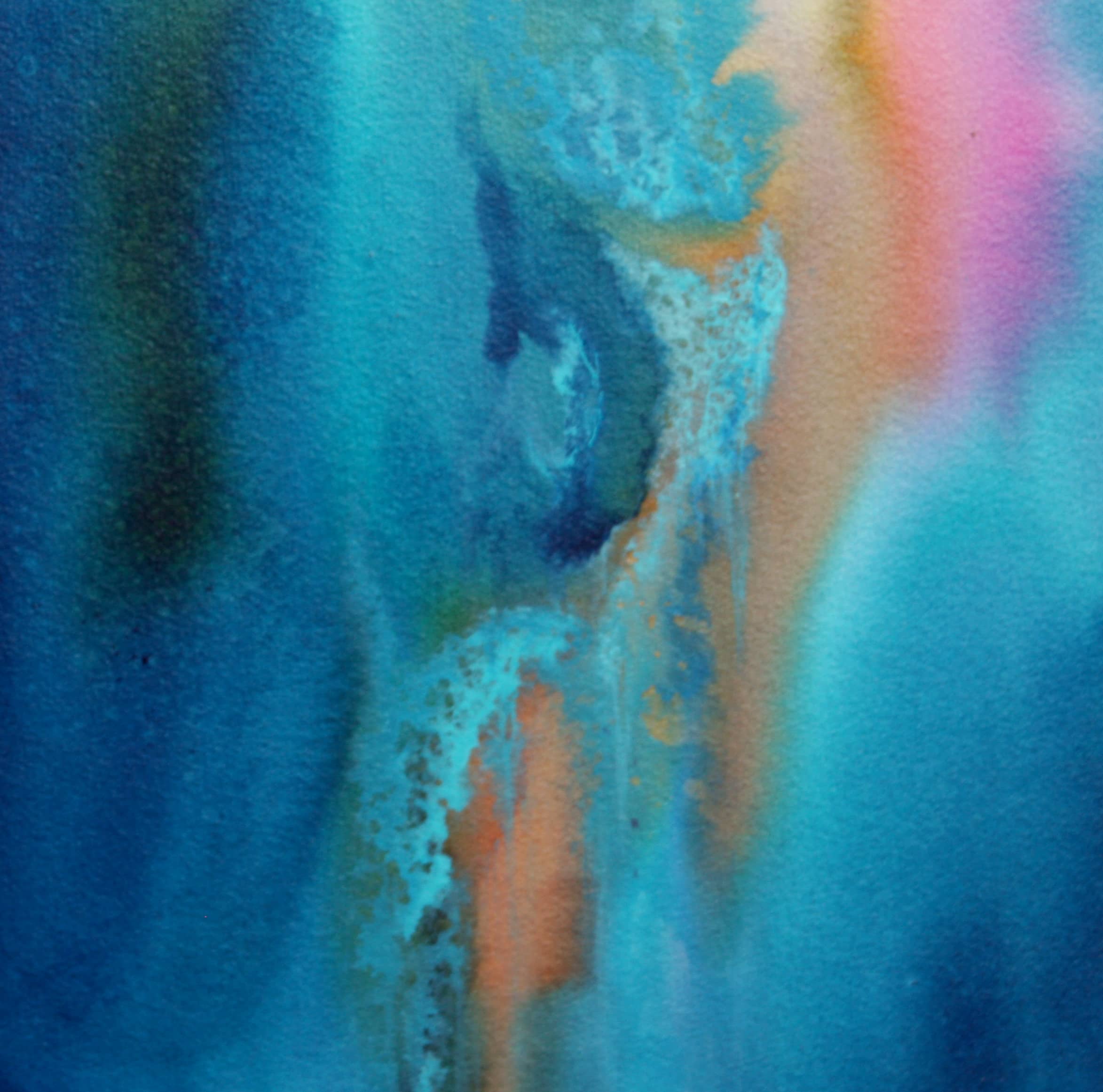 Do you ever make mistakes when you're working in your journal? Or doodling? Ever put down a wobbly line? Smear some ink? Drip watercolor where you didn't mean to? How does it make you feel? Perhaps a bit aggravated or disappointed? Do you ever want to tear a page out...

END_OF_DOCUMENT_TOKEN_TO_BE_REPLACED 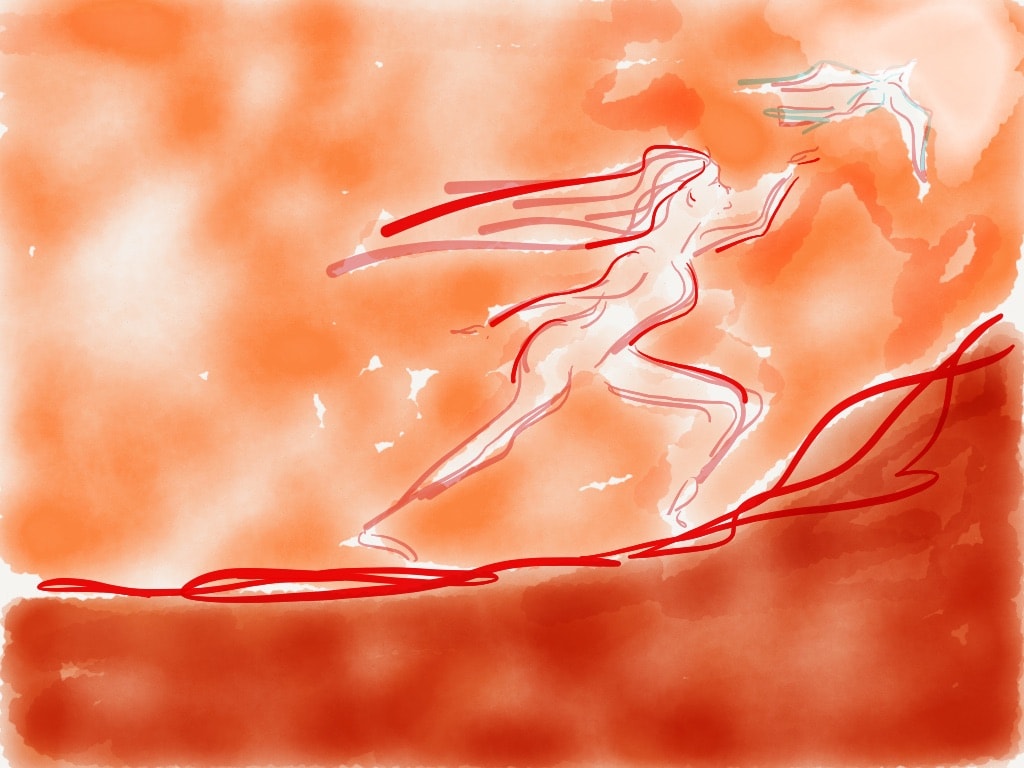 I know many of you have iPads (or other tablets) or smartphones. Have you ever thought of using them to make art? There are many, many fun apps that allow you to draw, doodle, "paint" and modify your photos—and a lot of them are free, have free versions, or cost only...

END_OF_DOCUMENT_TOKEN_TO_BE_REPLACED 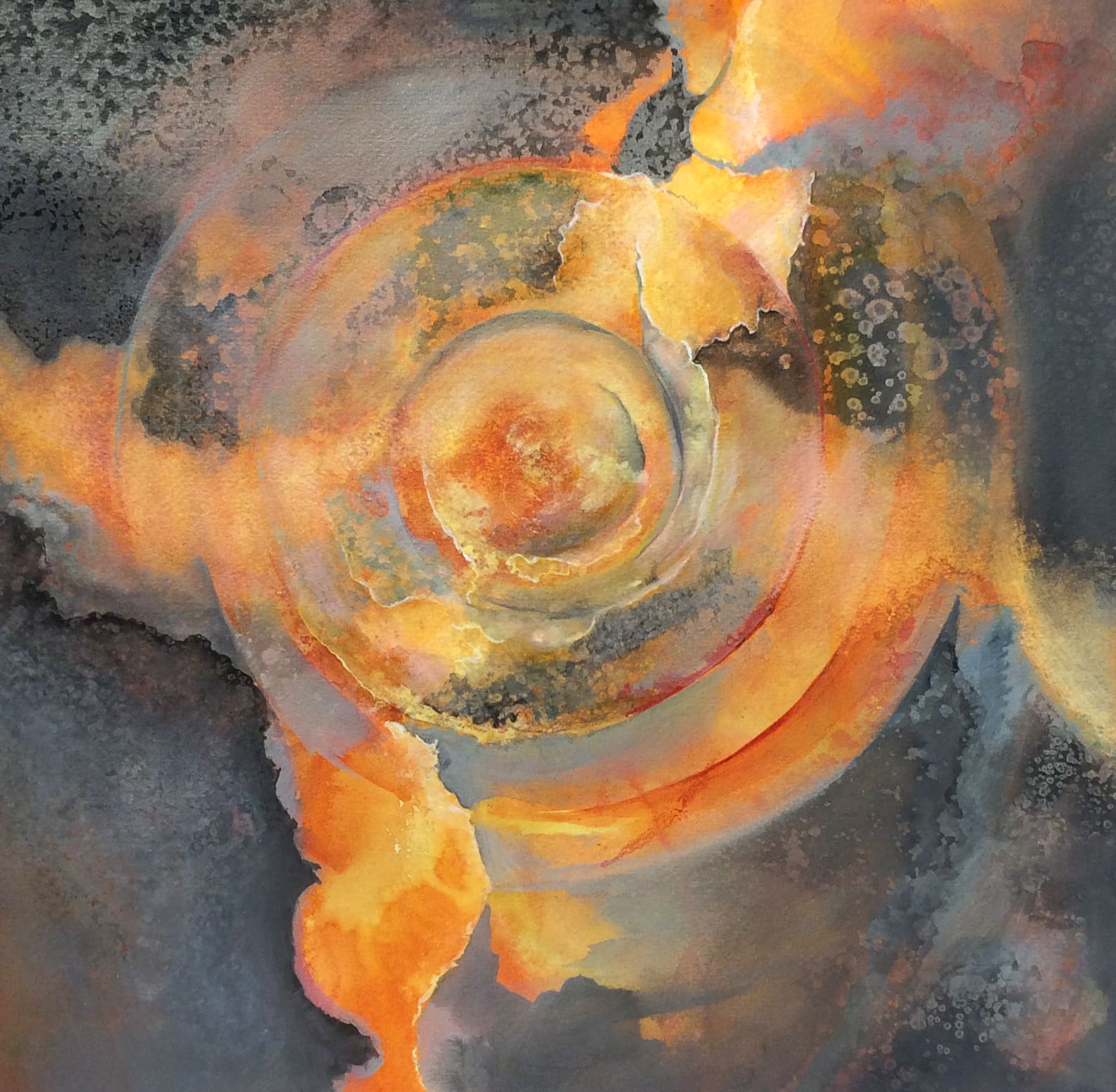 Get Out of the Moment

Huh? Everything you read these days seems to extol the virtues of being "in the present moment". I'm not questioning the value of being attentive, appreciative and aware. In fact, a few weeks ago, I suggested some ways to use art-making to deepen your appreciation for...

END_OF_DOCUMENT_TOKEN_TO_BE_REPLACED 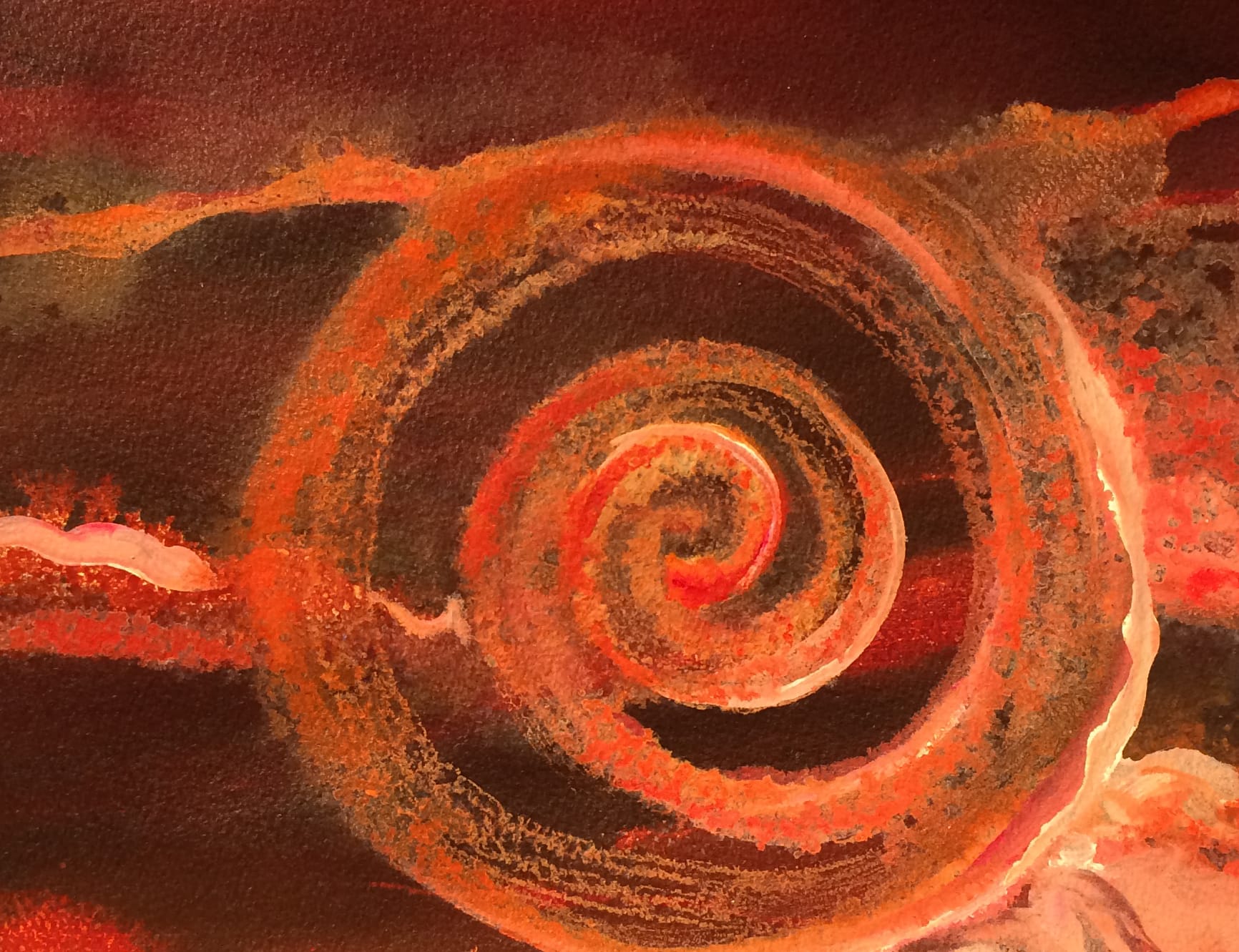 Spiral In, Spiral Out

The 30-Doodles-in-30-Days Challenge is drawing to a close, but one thing I have discovered is that everyone has enjoyed having a daily  doodling suggestion (a "prompt") as a creative springboard. Since I've been on a spiral kick myself lately, I invite you to create a...

END_OF_DOCUMENT_TOKEN_TO_BE_REPLACED

The Sound (and Look) of Music

Last week, I talked about the power of "doodling" or art-making to focus your full attention on a sensation or experience. This is one of the main reasons I make art. Not to hang something on the wall, but to enhance my experience of life. Sketches while traveling or...

END_OF_DOCUMENT_TOKEN_TO_BE_REPLACED 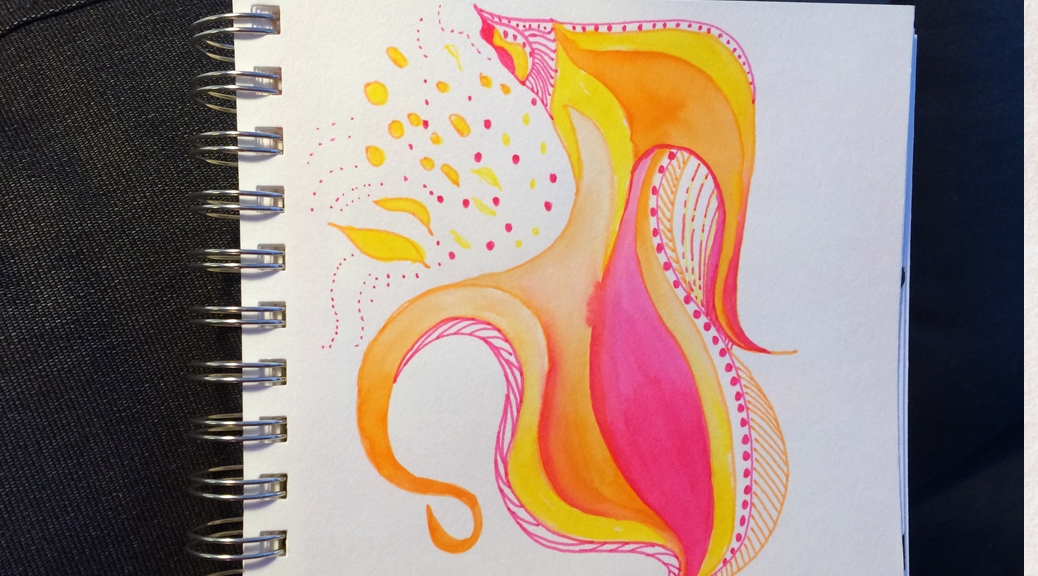 The “Mindfulness” Craze—What’s It Got to Do with Art?

I want to talk to you for a minute about mindfulness. Wait! Before you hit "delete", please hang in with me for just a little bit. I promise I will get back to art and creativity in a minute. Mindfulness is trendy.  Everywhere you look there are articles on the health...

END_OF_DOCUMENT_TOKEN_TO_BE_REPLACED 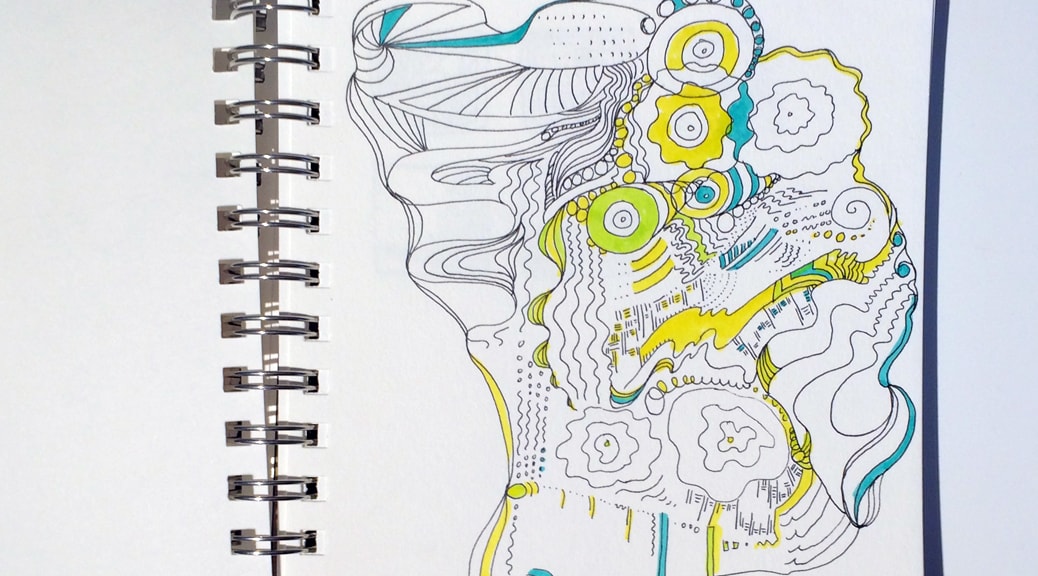 What would you do, if only . . .  ? New Year's resolutions . . . we love to hate them, but we make them. Even when we resolve not to make resolutions, there's still that feeling that now that the holidays are over, we'll get our lives in hand again, and this year do...

END_OF_DOCUMENT_TOKEN_TO_BE_REPLACED 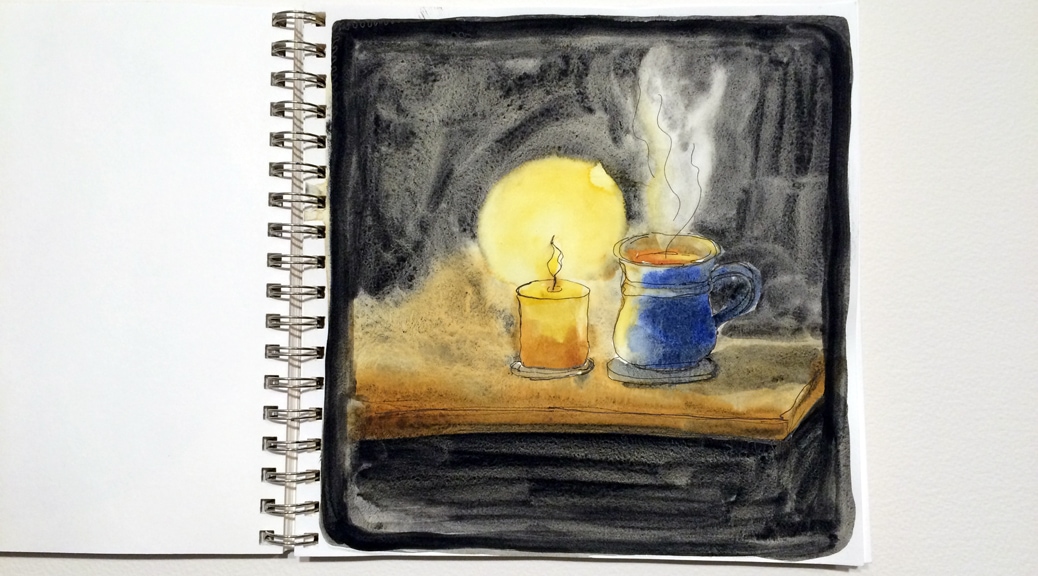 Isn't it a wonderful quirk of nature that just as the coldest months are about to begin, the days also begin to lengthen? The winter solstice is this Sunday night. After that, the days start lengthening toward spring. Why not take a little time from the rush and...